Obama – the EU referendum and the consequences of an interconnected world 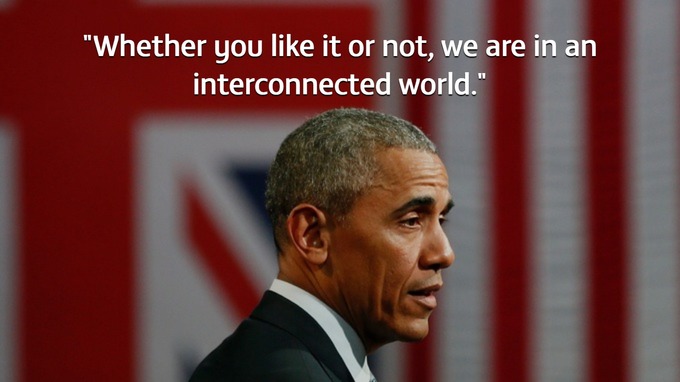 so said Barack Obama in his BBC interview with Huw Edwards this week. President Obama has made several comments about the UK EU referendum but it was this phrase that most struck a chord.

Over the last decade or so the business world has learned many important and often painful lessons about the reality of interconnectedness. Globally connected logistics systems can reduce the cost and increase the speed of supply of everything from books to car components – and global financial markets mean new ideas can find funding from crowds of investors spread across many continents. But the downside of these connections means commercial organisations cannot isolate themselves from the problems of their partners and shocks can quickly spread across a system. Resilient, collaborative systems can resist these shocks far better than individual companies, but building that resilience takes time and effort.

So can any of these lessons be applied to nations and to the EU referendum?

Well, whilst clear national borders are important (just like organisational boundaries) : to divide larger systems into manageable units; to give clarity about what decisions can be made within those borders and which require cross-border agreement; and to give people who live in country (or work in an organisation) a sense of belonging or identity – you also need to be able to work effectively in collaboration with others across borders. And when resources are tight the ability to draw on your neighbours’ goodwill and in return to show a willingness to share the knowledge or resources you have to offer becomes increasingly important.

Many (probably most) of the big issues we wrestle with today don’t respect national borders at all: climate change; economic growth; banking system collapses; terrorism; mass migration; epidemic diseases (zika/ebola); the impact of chronic health conditions and so on, all flow across any lines on a map that try to indicate a country’s boundaries. Even an island like the UK cannot isolate itself from their effects.

Now some people will argue that the EU has failed in tackling just these sorts of problems and that the UK could negotiate its own bilateral deals on trade; immigration; finance; welfare benefits on better terms than we have today. And no doubt it could negotiate many new deals – in time. But from all that we’ve learned from studying interconnected commercial and financial systems over decades one things is clear; whenever you need to form new relationships trust will be low. The initial years of any new relationship will be very transactional in nature as each side tries to suss the other out and find points of advantage. Now being transactional with your neighbours or partners isn’t necessarily wrong. You can negotiate some good deals when circumstances happen to be in your favour. But where transactional relationships fall down is when circumstances change and the environment is uncertain. Terms that looked favourable get overtaken by events, partners try to re-negotiate deals or even walk away. Situations where you had the upper hand turnaround and you are trying to strike a deal from a position of weakness. The whole system gets tied up in contractual wrangling as no-one is incentivised to help their partners out – beyond the limits of the individual 1-to-1 deals that are on the table.

One of the big lessons from studying successful business relationships is that when timescales are long and the environment is uncertain you need strong collaborations with a range of partners who are invested in each other’s success and who are bound together with a common belief in the benefits of what they can do together in future – even if the going is tough today.

So whilst the UK might be able to negotiate many dozens of bilateral deals with different countries on each of these issues – that would be incredibly time consuming, inefficient and would lack resilience. Far better to evolve the multi-lateral EU institutions that sit across a whole set of countries that are already tackling all these issues and more.

You can’t wish away interconnectedness. Modern countries aren’t walled city states where you could pull up a draw bridge and repel all outsiders. The idea that the UK could live an independent existence outside the EU is a fantasy. Even as an island we’d have one land border with the EU between the North and the South in Ireland and possibly another if Scotland held a second independence referendum after a Brexit vote.

In many ways the UK would be just as connected and dependent on our European neighbours as before but we’d be without the network of legal constructs, trading systems and political relationships to make those connections work. We might want to reform EU decision making; its systems and the way its officials behave – but we can’t dismiss them. They serve a purpose. If we were to leave the EU we’d need to build many other structures in their place to support the dozens of new relationships we would need to try to create.

In his BBC interview President Obama went on to talk about transnational problems requiring a transnational response – and that that meant supporting regional and international structures even when then are imperfect and frustrating. In an interconnected world the absence of co-operation and alliances makes us all weaker, and so politicians as well as business leaders need to understand what it takes to make them work.

For more about Socia’s view of transactional and relational collaboration see episode 1 of The Essentials of Collaboration at https://www.socia.co.uk/essentials01/

Your request has been received thank you